The term “responsive web design” came into existence as recently as 2010, less than three years ago at the time of this writing, and as such it might be a bit unfair to call upon the internet as a whole to rally around it so quickly. However, the fact of the matter is that if we are going to embrace responsive web design the time is now. The smartphone industry has been blooming for years now and tablets are certainly on the rise. In fact, over the course of 2013 tablet sales are expected to reach a remarkable 100 million units sold, perhaps even surpassing notebook PCs in popularity. Many popular sites have responded to this technological sea change by launching platform-specific apps, but this will soon prove to not be enough. The fact of the matter that, while a well-designed app is certainly a great resource, if your site is difficult to access when viewed online during regular internet surfing then your popularity will suffer. Smartphones and tablets distort the look of any site they view through the size of their screen alone. Frequently, the platforms render the text and menu options on the sites they visit too small to read or use comfortably. Clearly, something must be done, and the commonly touted answer is nothing less than the aforementioned “responsive web design.” 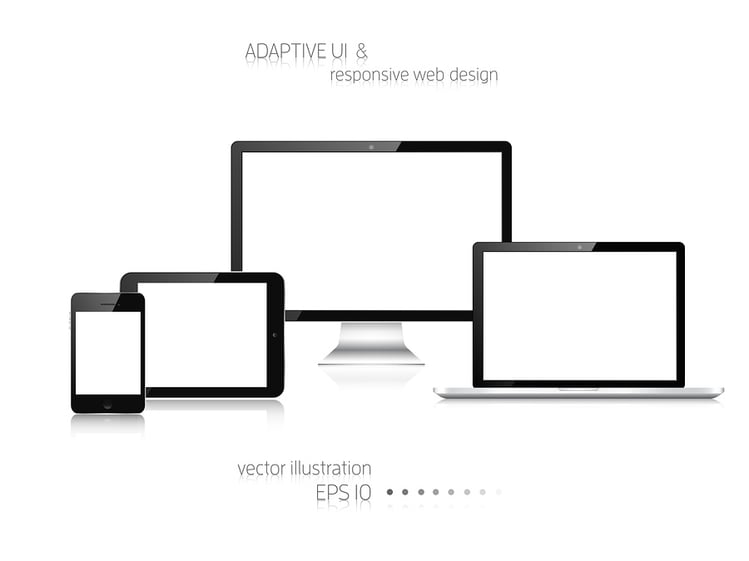 There are two popular solutions to the smartphone/tablet problem. The first is “adaptive web design.” This involves creating a differently sized site for each platform, usually small, medium and large models. This answer seems obvious, but it assumes that every platform on which these sites are visited will correspond to one of these three options, something which simply cannot be said with confidence in this day and age. With the rapid advancement of technology and the constantly increasing number of devices the web can be viewed upon (including the rumored Google watch), it doesn’t make sense to invest all of your faith in such a confined, limited solution. The more reliable solution is to employ highly adaptable “responsive web design,” a system through which sites can instantly (or near instantly) adapt to the size of any screen. Through the usage of this technology, the same site can be comfortably viewed on a PC and an iPod without difficulty. It certainly seems to be the answer.

Basically, responsive web design works like this. As soon as a site is visited, media queries immediately inform the site as to the resolution of the screen on which the site is being viewed. Based upon this information, the site alters the size of the fluid grid upon which it is built to match the realties of the data it has been given. Rather than utilizing pixels, a fluid grid relies upon less fixed units like ems. As such, it is more freely adaptable than the typical site. If the website has been built correctly the change should happen with remarkable speed. All pictures will change in size to match the size of the text. Often the text will wrap around the pictures or appear beneath them to correspond to the new positions the visuals have taken. A site which is three or four columns across on a PC may shrink down to one or two columns. Essentially, the site will be reorganized to make it easily readable on the smaller screen, its functionality will not be jeopardized and the user will be happy.

Many sites already utilize responsive web design. The Boston Globe created one of the first large sites to use RWD, but since their project was completed a great many others have adopted the format as well, including Disney, Time Magazine, Harvard University, Sony, Starbucks and Microsoft. More and more sites continue to adopt it. Still, a great many hold out. Why? Well, some just don’t want to put in the time and effort to make the transition. Others don’t give alternative platforms enough credit, thinking them to simply be a fad that will die out in time or underestimating the sheer number of people who use them. However, there are also a number of reasons why even a forward thinking, technologically savvy company might consider not jumping on the responsive web design train. Here are a few of them:

In the end, responsive web design will probably only increase in popularity as the years go on. It’s already being adopted by some of the largest, most popular sites out there, and for good reason. RWD really does simplify things for your customers, allowing them easy access to your site on any device, regardless of its size. This in turn benefits you, as a happy customer is the most fantastic resource a business can have. However, before you switch over to RWD weigh the pros and cons. Is it really worth it? Can you really spend the money and the time to make it happen? If the answer is yes, consider making the change to responsive web design. Your clients will thank you.