The Positive and Negative Effects of Illegal Downloading

In January of this year two bills, the Stop Online Piracy Act (or SOPA) and the Protect IP Act (PIPA) were widely protested across 7,000 sites, the largest of these being Wikipedia, through the usage of blackouts which made many of the sites inaccessible for a 24 hour period. This instilled some degree of panic, or at least frustration, in a great many people who wished to still wander the internet freely, the social ramifications be damned. Wikipedia did, in the fine print, offer ways to circumvent their blackout, methods which I implemented, guilty though I felt for breaking the picket line. For the minor inconvenience of having a few websites which were important to me momentarily unavailable, I understood the message clearly: I and tens of millions of others who use them almost every day might lose these pages forever.

SOPA and PIPA were drafted in an attempt to curb internet piracy, to stop sites from hosting content which was deemed “pirated” by threatening to excise them from the domain name system. In other words, if Youtube was found guilty of spreading illegal material then steps would be taken to ensure typing “youtube.com” into your browser would no longer take you to the site. Many of the opponents of the bill agreed that some regulation was in fact necessarily in relation to this problem, but that these bills were not the answer. This is largely because of their vague language which, if they had been passed in their original form, could have ultimately had devastating results, radically altering the internet as we know it.

What if one of the great many pages Wikipedia linked to contained pirated material? What if, on an otherwise innocuous article on CNN’s website someone posted an illegally obtained copy of the latest drivel from the Black Eyed Peas for all to imbibe? Yes, steps could be taken to attempt to curb the likelihood of these scenarios, but the fact of the matter is that it would be flat out impossible for sites as large as these to monitor every single comment made on every page of their website. Therefore, could those sites be shut down because they contained “unsavory” links? Based upon the language of the bills, such a scenario was very possible. This was censorship on a potentially massive level, the ramifications of which would have radically altered the internet at its very core and would have fostered an environment highly conducive to paranoia, fear and distrust. Through the actions of one individual, one stranger, an entire site might be deemed criminal. Every single visitor would now have been considered a potential criminal, a very real and very significant threat. Imagine the level of anxiety such an environment would have created. Imagine just how massive a change the passage of SOPA and/or PIPA would have brought.

Of course, SOPA and PIPA are just the latest, and certainly the most drastic, of many attempts made by congress (on behalf of media conglomerates like Time Warner), to beat piracy. There was the Digital Millennium Copyright Act (or DCMA) which allowed labels to include software on their DVDs and CDs which would disable the copying capabilities of the devices into which they were placed and also made it illegal to attempt to circumvent these measures. There was, somewhat famously, the case of Capitol v. Thomas, wherein a mother of four named Jammie Thomas was sued for downloading twenty-four songs from popular recording artists of the time like Guns ‘N Roses, Sarah McLachlan and the somewhat more anachronistic Def Leppard, and was ordered to pay $222,000, or $9,250 for each track. It was then decided that she was even more guilty than they had originally given her credit for, and so the price of her 24 songs was raised to an astonishing $1,920,000. In other words, Mrs. Thomas was now required to pay $80,000 for her bootleg MP3 of Gloria Estefan’s” Rhythm is Gonna Get You”, a very bitter pill indeed. However, you might be pleased to know that as result of her continued legal maneuvering, Thomas is now only being asked to hand over $54,000. As we all know, $2,250 is a small price to pay for a chance to listen to “Pour Some Sugar on Me”.

The Story of Napster 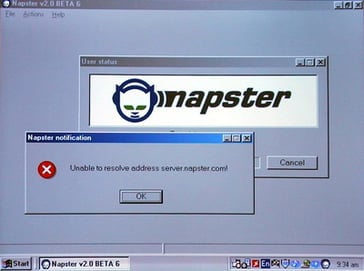 And then there was the tragic story of Napster. Following its creation by Shawn Fanning in at the close of the 20th century, the service proved revolutionary, presenting a new and incredibly influential way to share and appreciate music. At first, Fanning, along with co-founder Sean Parker (aka Justin Timberlake from The Social Network), simply created a database, a site which collected all the disparate music files contained throughout the web and made them more easily available. This compendium soon evolved into something far beyond an archival tool. Users traded music on the site and, as such, Napster soon became a hotbed of discovery, a place where listeners could explore the work of a vast variety of artists. This lead to some smaller artists gaining exposure they would not have otherwise received. One such act was an independent band called Dispatch. Though they were fairly popular in their home state of Massachusetts, the band, having not chosen to sign with a major label for fear of having to compromise in their approach, was not widely heard elsewhere. Largely through exposure on Napster the band became popular enough to become the first unsigned act to sell out Madison Square Garden, three nights in a row no less. Now they successfully tour not only the entire United States, but the world as well. Napster gave their music a platform, a means through which it could be proliferated far more widely than it could have been otherwise. When the Recording Industry Association of America (or the RIAA) attempted to shut Napster down, Dispatch stood alongside artists like Chuck D, Alanis Morissette and Don Henley in protest. Despite their efforts, the RIAA ultimately won out. Napster shut down, got bought out, and is now a paid music service, nothing more than a brand.

While Napster was great for bands like Dispatch, others suffered. The first to complain was Metallica, when they discovered, to their horror, that an unfinished version of song they had recorded for the Mission Impossible II soundtrack,” I Disappear”, had been made available on the site. The band fought back, with Metallica taking the site to court for, among other things, violating the Racketeer Influenced and Corrupt Organizations Act. For those out there who have always wondered what a “racketeer” actually is, now you apparently have your answer. They also said that Napster infringed upon their copyrights to that song and the others in their catalogue. Though Napster agreed to kick out users who attempted to share tracks by their beloved Metallica, ultimately this lawsuit would lead to the destruction of their company as they knew it. The situation gained enough notice that drummer Lars Ulrich decided to stage a little morality play at the 2000 MTV Music Awards within which he reprimanded Marlon Wayans (in the guise of a typically “devious” college student) for illegally downloading “I Disappear”. When Wayans said he was just “sharing,” Ulrich responded that he was, in fact, “borrowing things that were not [his] in the first place.” In response, Shawn Fanning appeared later in the program in a Metallica shirt. His response to Ulrich’s attack was simple, powerful and direct: “I borrowed this shirt from a friend. Maybe, if I like it, I’ll buy one of my own.”

I personally think that Shawn had quite a point. I understand Metallica’s position. They worked for that money, and they deserve to be paid for their efforts, but there are a lot of kids out there who probably heard Metallica for the first time on Napster, who went out and bought ReLoad because one of their friends sent them a copy of Fuel. Services like Napster (and I speak in the present tense because so many sites have come along to replace them) allow listeners to easily and conveniently hear new music. Some of them will stop there, content with their free tracks, but many others will buy that band’s records or pay to see their shows. Perhaps Napster should have been better regulated, but those who consider it a wholly negative force are absolutely missing the point. They cannot look beyond immediate monetary concerns to see the bigger picture.

As an aspiring writer/director with a company I co-founded, Ugly Dog Moving Picture Shows, I am faced with the task of getting my work seen. I personally plan to release it for free, to put it up on Youtube and send it to as many people as I can, hoping that they will do likewise. I want my films to be traded and consumed as Dispatch’s music was, for as many people as possible to be able to see it as conveniently as possible. I know Prince disagrees with my approach, and I absolutely get why he does. If Prince and Metallica want out of that world, I think they should be allowed out, with all of the benefits and detriments that status would bring. But that’s not reality. Online trading will always go on in some capacity. There will be positive effects, and there will be negative ones as well. Not only does the illegal trading and downloading of music allow for art to be spread with ease and convenience, but it also makes it possible, in an economy as tough as ours currently is, for people to hear music they otherwise simply could not have afforded to consume. On the negative side, record sales will decrease. In fact, they have, pretty dramatically.

But rather than clinging to an old system, one which apparently relies on fear and intimidation to stay afloat, perhaps it’s time for companies like Time Warner to accept the realities of the internet. Perhaps the very concept of labels itself is antiquated. As Radiohead showed us with the release of their album In Rainbows, a band can make just as much, if not more, working outside the studio system as they can within it. Perhaps we are entering an era defined by online distribution where, rather than relying on media conglomerates for distribution, artists will more and more frequently go into business for themselves, in control of their own product. I, for one, would welcome such a development, and I feel that illegal downloading and trading is, ultimately, a sign that we are headed in that direction.

At first, I was opposed to the digitizing of media as I feel there’s something special about reading a real book, watching a movie in a theater, holding a CD. However, my trepidation has been replaced with excitement, for letting go of our focus on this physical component opens up all of these fields to exciting new possibilities. Perhaps instead of combating the realities of the modern era, congress should instead recognize that things are changing, and changing fast. After all, it’s a lot harder to illegally share music on vinyl records than digitally released MP3s. Why not revert back? Sure it would take some getting used to, but a lot more Metallica fans would be shelling out $15 dollars for a record. No, wait, I’ve got a better idea: let’s move forward, all of us together, accept the consequences and, as hard as it might be, change. We’ve done it before, now we must do it again. I’d say we were in danger of stunting the modern age, of holding it back, limiting its growth, but I know that it will continue to grow regardless, weave around the obstacles placed in its path, find a way. That being said, it’d be much simpler if we were all on board.