Pokemon Go and the Face of Augmented Reality Marketing 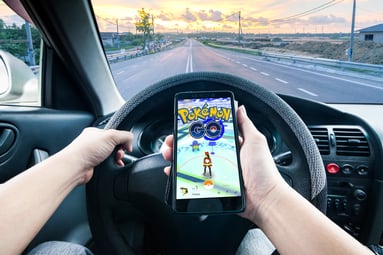 Now and then a mobile game will spark a good deal of discussion, as Angry Birds and Flappy Bird did in 2013. Pokemon Go is different. Businesses around the world have benefited from the app, with patrons flocking to their stores or restaurants to catch Pokemon and then staying to eat or shop. Some areas have experienced reduced crime rates because of an increase in foot traffic, with criminals or being caught in the act or being discouraged from acting at all due to a lack of privacy. Pokemon Go has even improved the health of many of its users by encouraging them to walk long distances to find valuable Pokemon. The app has entered the public consciousness in a major way, being reported at by every major media outlet in the country. In the process it has sparked a discussion about the budding world of augmented reality. Can the technology used in Pokemon Go be successfully implemented by companies to drive sales? One thing is certain: the potential of augmented reality as a marketing tool for businesses has never seemed so bright.

As a game, Pokemon Go is very rudimentary. You walk through the real world (as seen through the camera to the screen of your phone) encountering virtual Pokemon and catching them with a swipe of your finger. As the game goes on, the Pokemon you encounter become stronger and more difficult to catch.  The gameplay never really evolves beyond flinging Pokeballs and hoping for the best. Now and then, you will encounter other trainers with whom you can engage in very simplistic battles or Poke Centers where you can buy additional balls and other useful items. I tried the game myself, quickly, I caught a bulbasaur, a weedle and a pidgey, but felt no strong desire to continue. However, for many people, Pokemon Go has become something of an addiction. They spend their days plastered to their phones not knowing when a potentially rare Pokemon will emerge from the virtual grass. They even go out of their way to hunt, taking trips with no other intended purpose than to locate new entries for their Pokedex. My Facebook feed is littered with discussions of Pokemon Go, and there’s a strong chance that yours is as well. Whether you are taking an active role in this trend or not its presence is inescapable.

While I personally don’t find Pokemon Go very interesting as a game, the effect it has had on society is fascinating and marketers are taking notice. Virtual reality is a very trendy topic at the moment with products like the Oculus Rift and the HTC Vive slowly gaining popularity. However, there has been much less talk of augmented reality, largely due to the failure of Google Glass. Where virtual reality immerses you an artificial world, augmented reality takes the real world and adds artificial elements to it, either to provide the user with additional information or entertainment value. The map in Pokemon Go is nothing more than a GPS-created map of the actual area the user is currently inhabiting, and the Pokemon they catch appear with the real world as their backdrop. As such, Pokemon Go certainly qualifies as an augmented reality app, and it is easily the most widely adopted one to date. No other Augmented Reality or Virtual Reality app has had such widespread popularity from the public like this. Many businesses have already seen their profit margins increase from Pokemon Go, but there is a great deal of potential for expansion.

Companies can already buy lures, (virtual devices which temporarily bring more Pokemon to a certain spot). However, developer Niantic Labs is prepared to go much further to help companies use Pokemon Go as a marketing tool. In the coming months, businesses will be allowed to sponsor events within their walls leading to more foot traffic. There may be rare Pokemon which are only available inside a certain shop. This is similar to how popular brand Funko produces certain products which are only available in a given store, such as Hot Topic for example. This is good for both companies, as the store gets increased patronage and potential sales and the value of the product offered by the distributor goes up due to its exclusivity. While there are no plans to monetize Pokemon Go for regular users, there’s no reason to imagine that Niantic will not charge companies for the right to use Pokemon Go for their own devices. Users will be driven to the store because of their commitment to their augmented reality app but they will theoretically be purchasing real world products in the process. This shows just one of the many ways that augmented reality can be used to improve sales.

In the above example, there is still a middle man Niantic, that is coming between these companies and their potential customers. Could augmented reality be used by companies directly to drive sales in the same way? That’s a difficult question to answer. Theoretically they could, as long as these companies are careful to make apps which provide actual value to the consumer and don’t feel overly manipulative or pushy. On the other hand there have been plenty of AR apps in the past, none of which have had the sales potential of Pokemon Go. In fact, it’s a powerful marketing tool largely because it does not seem like one. Any sales made right now due to Pokemon Go are organically driven, as there’s very little manipulation involved. Building a similarly popular AR app specifically designed for marketing a given product or service would be difficult, but not impossible. At the very least VR and AR could be used to allow customers to “try out” products, though it’s unlikely that users would trust the experience to accurately reflect reality. Remember, as a concept AR and VR are still foreign to many people. They are willing to accept Pokemon Go because of the brand and the level of fun involved but that is not necessarily an indication that these people are ready to accept AR in general.