Early next year, probably around March, the internet will go through a change which could radically alter the way we browse forever. ICANN, the Internet Corporation for Assigned Names and Numbers, in an effort “to promote competition in the domain name market while ensuring Internet security and stability,” has decided to allow for the generation of as many as a thousand new “top-level domains.” This essentially means that instead of utilizing the traditional “.com” or “.org,” a company could employ a URL ending in, for example, “.music” or “.brandoesquesquid.” There could be as many as 1,000 of these new web addresses, narrowed down from 1,930 applications. Google alone has applied for around one hundred for the somewhat lofty price of approximately $18,500,000, from obvious choices like “Blog,” “Chrome,” and “Docs” to more perplexing picks like “Boo,” “Foo,” and “Soy.” The possibilities are near endless, provided your selection meets with the approval of the Governmental Advisory Committee (GAC). 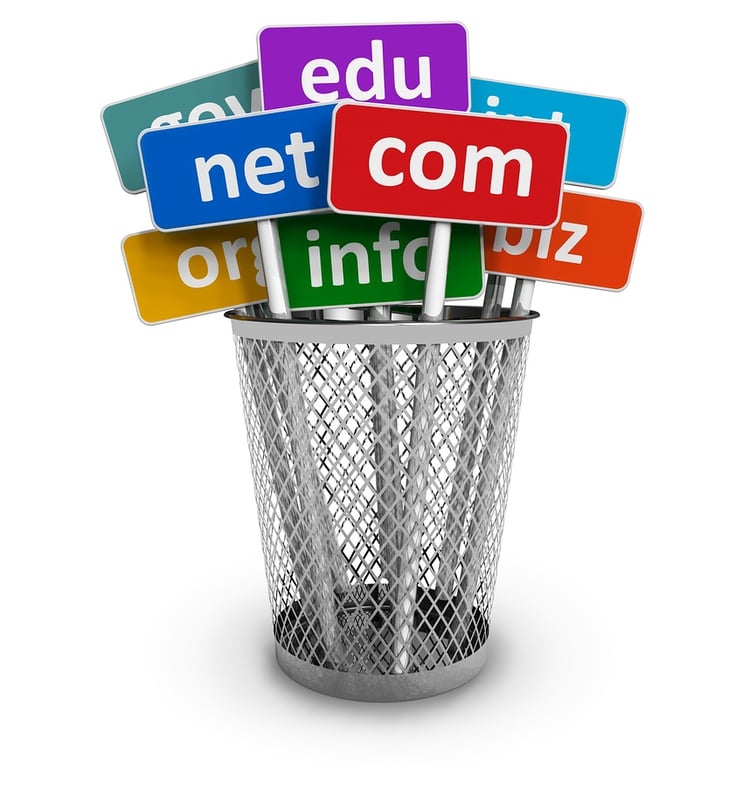 That being said, whoever wants one of these exclusive domains has to be willing to pay. Registering alone requires one to fork over a non-refundable $185,000 fee for a domain they might not even ultimately receive. Thirteen companies, of which Google is of course one, are fighting over the domain name “app.” Also vying for that particular domain is Amazon.com, who have their own list of 100+ potential options, both obvious (“Kindle,” “Prime”) and a bit odd (“Audible,” “Moi,” “Silk”). Despite this competition, ICANN is not taking the opportunity to generate even more capital by auctioning off these domains. Instead, they are taking it upon themselves to decide which company would be the most “appropriate” owner. Whoever came out on top would have exclusive licensing rights for that domain.

What is the Point?

This does seem like a potentially huge shift in the way internet searching is done. Generally, URLs are pretty predictable. Say I want to look up a webpage for a band I like, The Hold Steady for example. I can pretty much assume that their web address is “theholdsteady.com,” but if that turns out not to be the case I’ll know to try “holdsteady.com,” “theholdsteady.net” and so on. Under these new rules, their web address could potentially be “theholdsteady.sock.” This would certainly add a level of unpredictability to surfing the internet simply because such an eventuality would now be possible. Of course, in the case of The Hold Steady I doubt they would see much benefit in having a “.sock” domain name. They would probably just stick to “.com” as it’s just the simpler way to go. This raises an important issue, namely “what is the point?”

Was anyone unhappy with having “.com” as their domain name? What would a service like Spotify, for example, gain from having “.music” instead? Are we suddenly going to realize, after all this time, that they’re a music service? This entire enterprise would make more sense if, say, every music site on the web was given a “.music” domain, but as I previously stated whoever owns that particular domain when this business with ICANN is said and done controls it, so if Amazon.com understandably doesn’t want to help their competition by giving them access to a “.books” web address they can simply say no or charge them exorbitantly high fees. This will eventually lead to websites which are already incredibly popular having URLs which are different from those of the sites which are not as popular. This is all both unfair (in that ICANN’s pick would essentially have a monopoly on the domain) and almost entirely meaningless.

Would it be cool if, say, you wanted to search for video games on Amazon and all you had to type into the search bar was “amazon.videogames”? Sure. And think of all the precious nanoseconds of your time it would save too. This is a potential result of ICANN’s plan, and it seems like might actually be slightly useful, if not necessary in the least. But don’t think that whatever you type into that address bar will lead to what you’re looking for. For example, there are six companies vying for the domain name “.news” and none of them are news agencies. Of course, one of them is Amazon.com, though Google surprisingly chose to sit this one out. So while this new approach would make searching for some things slightly simpler, it would add needless, pointless complexity to internet browsing in general.

Those who disagree with my stance might point out that there are, in fact, already some “top-level domains” out there, “.biz” and “.mobi” for example. But when was the last time you visited a website which implemented either of those choices? I’m not sure I’ve ever been to one myself. Let me reiterate again that, rather than a few mildly popular “top level domains” floating around on minor sites, there will be in fact one thousand of these new domains strewn across some of the world’s most popular sites. Plus, if ICANN’s rationalization didn’t already seem absurd enough, they’re not going to stop here. There could be another thousand new top-level domains the next year, and the year after that, on and on and on.

ICANN and I Will

These situations, which ICANN hopes to compare as a way of making their actions appear at all reasonable, seem completely incomparable because they undoubtedly are, and yet ICANN is remaining resolute, saying the following in their official FAQ:

“The increase in number of TLDs into the root is not expected to affect the way the Internet operates, but it will, for example, potentially change the way people find information on the Internet or how businesses plan and structure their online presence.”

To recap: all of these new domain names will not change the way the internet functions, just the way that people use it. If it weren’t for all those people trying to find things you’d barely notice the difference.

There is certainly a myriad of other problems to discuss here, from the potential controversy of deciding what is allowable and what is not in terms of domain names to the fact, despite their claims that they are not interested in profiting from their incredibly lucrative venture, that many top ranking members of ICANN are also involved with domain registration agencies, but these issues are but flecks of filth upon the might refuse heap that is ICANN’s plan. Agreeing with me is something called the US Association of Advertisers, who drafted a petition within which they stated that “given its undisputed costs and its merely punitive benefits… the ICANN proposal would unduly burned a diverse range of public brand holders.” They went on to say that there was “an unacceptably high risk that the ICANN plan would confuse customers, increase the already unacceptable level of fraud and identity theft on the internet, create new opportunities for Internet crime, and jeopardize cyber security.” This statement was signed by eighty corporations, including Nestle, Johnson & Johnson, General Electric, Ford and Coca-Cola. ICANN didn’t let a little thing like that deter them. They had a dream, to make the simple task of browsing the internet needlessly confusing, to give the powerful a small token, a minor little reminder of their influence, which ultimately has next to no meaning, and to generate $357, 050,000 which they claim to have no interest in. In the end, whether you feel angry, trepidatious, excited or ambivalent, this thing is happening. Personally, I have accepted my fate with my usual tired cynicism. Nothing to do now but sit here and patiently wait for the Google Foo revolution.