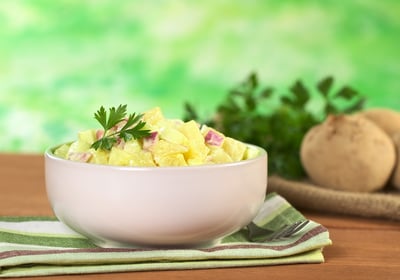 On July 3rd, Columbus, OH resident Zack “Danger” Brown posted a project named “Potato Salad” on Kickstarter. His stated goal was to earn $10, money he would use to make a potato salad of his own, though he “ha[d]n’t decided what kind yet” and warned potential backers that “it might not be that good” because it was his “first potato salad.” Within a few hours Brown’s project was completely funded. Later that day he instituted some stretch goals, saying that he would make four times as much potato salad if pledges were to reach $40 and an additional type of potato salad if the project made it to $100. Those goals were likewise met within 24 hours. CNET took notice of the Kickstarter’s progress, writing an article about the phenomenon. Soon, other media outlets began to follow suit, including the BBC, USA Today, Forbes and the New Yorker, each one bringing additional exposure to the project. Brown was even a guest on Good Morning America. In the face of all of this additional exposure Brown continued offering new perks, including custom hats, higher quality mayonnaise for the potato salad and the suggestion that he would “probably do a third recipe” should the campaign reach $350. When it reached $3000, Brown promised to rent a hall and hold a “potato salad party” for “the whole internet,” with hundreds (or even thousands) of people expected to attend and four types of potato salad (one of them vegan) ready for sampling. As of this writing, composed four days before the completion of the funding period on 07/31/14, the project has earned almost $53,000 (with 70 hours remaining).

Check out the KickStarter Potato Salad Project yourself: click here

For some, Brown’s Kickstarter is little more than a passing amusement. Most, if not all, of those who supported his campaign did so because they found it funny, not because they believed in his goal or even particularly wanted some potato salad. However, others view the Potato Salad project as being the worst of Kickstarter, and of crowd-funding in general. In the past, Kickstarter had been much stricter about the types of projects they’d accept, with each one being personally vetted and examined before it was allowed to go live. Now the submission process is much more lax, with the site basically accepting any project which is not illegal or immoral. And yet, many are saying that Brown’s project is “immoral” to a degree. Why, they ask, should Brown’s project have gotten so much support when more meaningful crowd funding attempts, the kind which could actually help people in need, have fallen by the wayside time and time again? Some argue that Brown should give the money to charity, something which is not actually allowed by Kickstarter, or at the very least take all the potato salad he’s making and give it to a soup kitchen to feed the homeless. Indeed, what does it say about our society that this project was funded based not upon its importance but instead its frivolity?

Regardless of how you might feel about his project or his usage of the Kickstarter platform, whatever judgments you might place on Brown don’t really matter, as it’s his money to spend. He has an obligation only to his backers, and he’s got more than enough to worry about on that front. If he maintains his campaign promises, Brown will be:

As with many less than reputable Kickstarter projects it seems unlikely that pledgers will get the items they’re meant to receive. Sending out the bites of potato salad has proved a logistic nightmare, though Brown says that he’s working to find a cost-appropriate solution. However, Brown has already admitted that he will not be able to add in all 998 ingredients, saying that he will only add those which have “a reason to be there.” Kickstarter itself cannot be held legally responsible if a campaign’s promises are not fulfilled, though they do invite backers to sue projects if they are not satisfied, not that many backers would likely find it worthwhile to hire a lawyer to litigate a case based around a $3 potato salad pledge. Regardless, the pledgers who are supporting the Potato Salad campaign don’t really seem to care one way or the other. Whether they receive their bite of potato salad or not they still got to engage in something strange and amusing, and for most of them that seems to be enough. Of course, this attitude, and the entire campaign for that matter, runs contrary to everything that Kickstarter is meant to stand for. The site was supposed to be a place where innovative inventors and dedicated small business owners could find the support they needed to realize their dreams and, perhaps, improve the world in the process. The Potato Salad project has made a mockery of that, though it could be argued that, by making their submission process so much more relaxed, Kickstarter all but invited such mockery.

However, there are still projects out there that realize Kickstarter’s original ambitions. Recently, an inventor named Josh Malone created, with the help of his family, a product called Bunch O Balloons, a fast and easy way of filling 100 water balloons at once. The balloons are connected to a plastic stem which attaches to an ordinary garden hose. Simply turn on the hose and the balloons fill with water within seconds. After that, all you have to do is give the stem a shake and the balloons will pop off, ready for use. They even come pre-tied so you’ll never have to worry about spills. Malone’s invention was the kind of product that Kickstarter was created to fund: it was imaginative, useful and unique. More than anything else, it was simply a great idea. Still, it’s remarkable to see how positively the Kickstarter crowd has responded. Originally, Malone asked for $10,000 to begin production on Bunch O Balloons. He reached his goal in less than 12 hours. Less than a week later at the time of this writing the project has earned almost $584,329. Bunch O Balloons are sold out through September 2015, and Malone has promised not to begin to sell them publically until the order of every single Kickstarter pledger has been filled.

In the end neither of these projects can objectively be called “better” than the other. However, there is no denying that Malone’s Bunch O Balloons project is far less cynical than Brown’s Potato Salad. Brown’s project is amusing, and for some that’s enough to make it worthwhile, but Malone’s gets to the heart of what sites like Kickstarter and Indiegogo were trying to accomplish in the first place. As such, regardless of which project you might appreciate more, Potato Salad and Bunch O Balloons do certainly represent the two sides of crowdsourcing and, therefore, the duality present in the populations which frequent such sites. Which is “better” or “more valuable” is up for debate, but the truth is that there’s a place for both, and whatever the future holds for these two projects there will undoubtedly be many more of their kind to come.